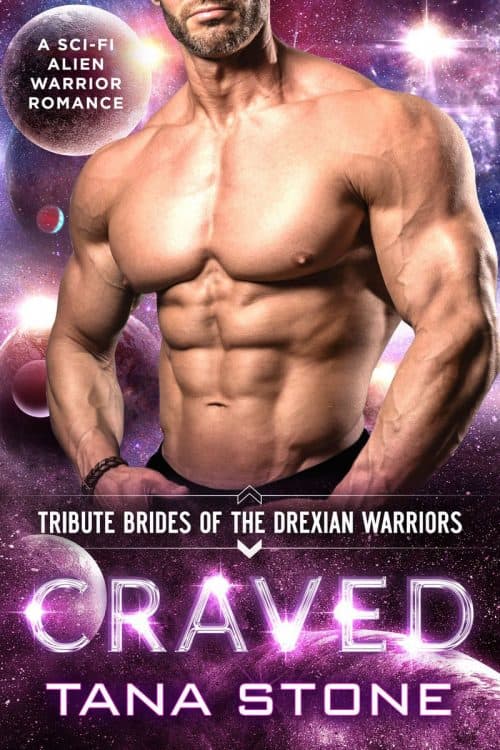 She thinks the gorgeous, silver fox alien is a hologram. He’s not.

The only alien warrior True isn’t intimidated by is the one in her holodeck simulation. Not only is True a virgin, she’s barely been kissed, so the huge, hunky Drexian warriors terrify her. But the guy in her simulation doesn’t. He may be as big and built as the rest of them, but she knows he’s not real. It’s the only reason she’s not afraid to kiss him.

Captain Varden never meant to lie to True, but when she assumed he was a hologram, he didn’t correct her. Especially not after she laid that kiss on him. Now she’s convinced he isn’t real, which is probably for the best. He’s too old for someone as young and pretty as her, although when she kisses him he feels like a Drexian cadet again.

When the Kronock attack and they’re forced to abandon the space station, True comes face-to-face with her hologram—on the escape transport. Before she can be properly outraged, they’re stranded on a jungle planet. Between trying to stay alive and evading the enemy, can she forgive him for deceiving her? Can he ever accept that she could fall for someone so much older?

This standalone alien abduction romance novel features steamy scenes on a jungle planet, action-packed space battles, smoking-hot Drexian warriors who will do anything to protect the women they love, and a guaranteed HEA. If you like silver foxes, aliens with extra erogenous zones, and virgins getting (a lot) more than they bargained for, you’ll love CRAVED, the eighth book in Tana Stone’s sci-fi romance Tribute Brides of the Drexian Warriors series.